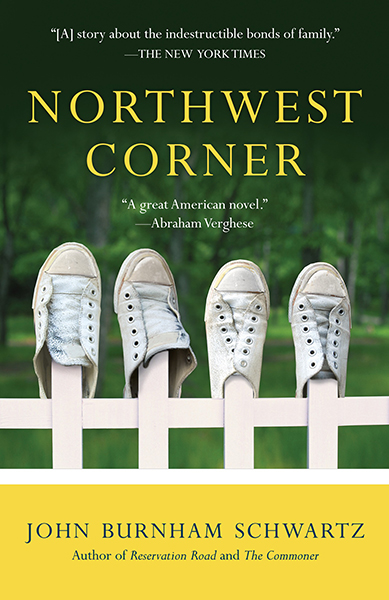 The New York Times Book Review called Reservation Road “a triumph,” and the novel was acclaimed everywhere. Now, in a brilliant literary performance by one of our most compelling and compassionate writers, John Burnham Schwartz reintroduces those unforgettable characters in a superb new work of fiction that magnificently stands on its own. Northwest Corner is a riveting story about the complex, fierce, ultimately inspiring resilience of families in the face of life’s most difficult and unexpected challenges.

Twelve years after a tragic accident and a cover-up that led to prison time, Dwight Arno, now fifty, is a man who has started over without exactly moving on. Living alone in California, haunted yet keeping his head down, Dwight manages a sporting goods store and dates a woman to whom he hasn’t revealed the truth about his past. Until an unexpected arrival throws his carefully neutralized life into turmoil and exposes all that he’s hidden—and dares him to ask for, and perhaps earn, forgiveness from those he has damaged, including himself.

Sam, Dwight’s estranged college-age son, has shown up without warning, fleeing a devastating incident in his own life. In its way, Sam’s sense of guilt is as crushing as his father’s. As the two men are forced by unfolding events to confront their similar natures and their half-buried hopes for connection, they also must search for redemption and love. In turn, they dramatically transform the lives of the women around them: the ex-wives, mothers, and lovers they have turned to in their desperate attempts to somehow rewrite, outrun, or eradicate the past.

Told in the resonant voices of everyday people gripped in the emotional riptide of lived life, Northwest Corner is at once tough and heartlifting, an urgent, powerful story about family bonds that can never be broken and the wayward roads that lead us back to those we love.

“Imaginative and taut, Schwartz’s writing is seamless and infinitely inspired.”
—Publishers Weekly
“Stark and deeply affecting.”
—Kirkus Reviews (Starred Review)
“While this isn’t the first story about the indestructible bonds of family, it’s an especially nuanced and moving one.”
—The New York Times

“With vivid prose and boundless empathy, Schwartz digs deep into the psyches of his all-too-flawed characters… One of the most emotionally commanding novels of the year.”
—NPR

“Poetic, introspective, evocative… Northwest Corner ranks up there as one of the most gut-wrenching books I’ve ever read… Exhilarating.”
—Entertainment Weekly (Grade: A)